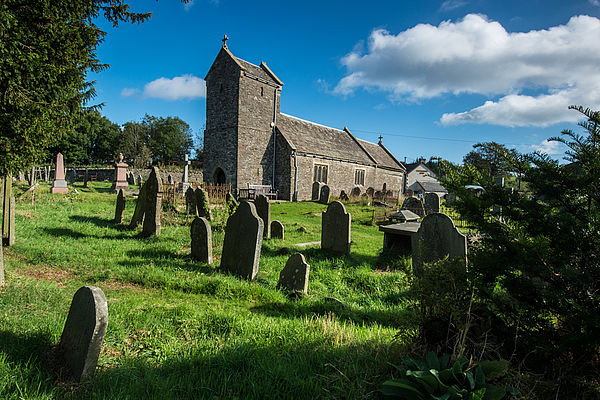 St Illtyd's church is without doubt the oldest standing building within the County Borough of Blaenau Gwent. Although currently dedicated to St Illtyd, the original dedication of the church was to St. Heledd or Hyledd, as evidenced by parish lists of the 16th and 17th centuries (Baring-Gould 1911, 254). This gave the place-name Llanhyledd of which Llanhilleth is an anglicised form. Brynithel is probably a variant of Brynhyledd and not to be connected with the death of King Ithel of Gwent in 848 AD, which took place at Aberysgir in Powys (Jones 1952, 135).

Current archaeological thinking marks St Illtyd's large, roughly circular churchyard as an indication of a pre-Norman foundation date (Brooke 1980, 72 et passim) and the earliest written reference to the church is found in a poem of the 9th or 10th century in Llyfr Du Caerfyrddin ("The Black Book of Carmarthen") (Jarman 1982, lix).

THE BLACK BOOK OF CARMARTHEN

The Black Book of Carmarthen is a small Welsh manuscript written about 1250.  It is the work of one scribe, a monk of the Priory of St. John in Carmarthen, and contains a collection of poetry much older than the manuscript itself.

Among the poems is a series of short verses known as Englynion y Beddau ("The Stanzas of the Graves") which was composed in the ninth or tenth century.  The poems list the graves of Welsh heroes, the past vigour of the hero being contrasted with the desolation of his grave.  Many of the identifiable places appear to be ancient burial sites such as cairns or cromlechs.  Among them is:

After things blue and red and fair
and great steeds with taut necks,
at Llanheledd is the grave of Owain.

It seems likely that the "grave" referred to in the poem is the large mound near the church.  This is usually regarded as a Norman motte, probably dating to the 11th or 12th century.  It is more than possible that the motte was built over an earlier mound - probably a prehistoric barrow or cairn.

The Owain referred to is Owain the son of Urien - a real person who later grew into a legendary hero in medieval romances.  In real life, he was the son of Urien, the 6th century king of Rheged.  Rheged was a Welsh kingdom that covered the Solway Firth, Carlisle and all the area now known as Cumbria.  Owain and Urien fought bravely against the Anglo-Saxon invaders and their deeds are recorded in poems by their court poet Taliesin.  After his death, Owain became a legendary hero, the stories told about him moved to Wales and he became associated with the Arthurian cycle of tales.  He is the hero of the 12th century tale "The Lady of the Fountain" which is one of the stories of the Mabinogion (Stephens 1998, 546).  Why such an early poem connects Owain with Llanhilleth is a mystery.

Heledd was also a real person who lived in northern Powys in the early 7th century.  Her brother, Cynddylan, was king of Powys until he was killed by the Anglo-Saxons.  She appears in Canu Heledd ("The Song of Heledd") another series of poems, also composed in the 9th or 10th century.  The poems are the verse highlights of a lost prose saga.  In them, Heledd laments the destruction of her home and the death of Cynddylan and her other brothers.  She seems to blame herself for the disaster that has befallen them (Stephens 1998, 87).

Stand forth, maidens, and look upon
The land of Cynddylan;
The court of Pengwern is blazing,
Woe to the young who yearn for their brothers.

Once again, why this small church on a barren Gwent hillside should be dedicated to a 7th century princess of Powys is not known!

With the foundation of the Cistercian Abbey at Llantarnam sometime between l175 and 1179, the parish came under the control of the White Monks (Davies 1953, 98).  The monks owned the manor of Wentsland and Bryngwyn that contained land in the parishes of Llanhilleth, Trevethin and Aberystruth.  Known as the White Monks from the colour of their habit, the Cistercians chose remote sites for their abbeys and were dedicated to simplicity of living. Using outlying granges to farm their land, they became major agriculturalists, running huge flocks of sheep over the mountains of Wales.  The granges, which mostly date from the 13th century, consisted of enclosures containing granaries, stalls and pens for livestock, living quarters for lay brothers and hired labourers and, in some cases, a chapel (Cowley 1977, 78).  Arail Farm was also a grange of Llantarnam Abbey.

There is more and more evidence that the Cistercians were building chapels on or nearby their granges (Williams 1976, 81-82) and it is likely that they were responsible for building the present church sometime during the 13th or 14th centuries (Rees 1948).  Most of the fabric of the church probably belongs to that period, though the font may have belonged to the original pre-Norman building.

John Wesley visited the parish in April 1740 during his second visit to Wales.  On Tuesday, April 8th, in the company of Howell Harris, he travelled from Pontypool to Llanhilleth and preached there on the text “I know that in me dwelleth no good thing”.  He stayed overnight and, the next morning, read prayers at St. Illtyd’s church before preaching on “I will heal their backsliding, I will love them freely”.  He then travelled on to Cardiff (Williams 1971, 6-7).

In the autumn of 1799, the church was visited by Archdeacon Coxe on his “Historical Tour in Monmouthshire”:

“At Lanhiddel we baited our horses at a public house, and strolled, in the midst of a violent shower, to the church, which is situated on the summit; it is a small but ancient gothic building, constructed in the most simple form, without a tower of belfry, the bells being placed under the roof, and the ropes descending into the church.  The church yard is painted with twelve old yews, which surround the church, and add to the solemnity of the scene: it is dedicated to St. Ithel, with whose merits and genealogy I am wholly unacquainted.”(Coxe 1801, 252-3)

St Illtyds church is also the starting point for 2 of the Tyleri Trails.