The Big Arch in Ebbw Vale, one of the largest early horse-drawn railway bridges in Britain symbolising the town’s place in the history of iron and steel making in Wales, has been restored to its former glory.

Constructed in 1813, Big Arch was once the northern gateway to the Ebbw Vale Ironworks and then in later years to the sprawling Ebbw Vale Steelworks. Itis now one of the few surviving tangible reminders of the area’s rich industrial past.

The 200-year-old structure is in reasonable condition for its age, however the masonry arch barrel had areas of structural concern (such as open joints and voids) caused by the continuous passage of water through the structure over the years. As a result, significant damage had been done to the fabric of the arch with the stonework face delaminating and the mortar joints being washed out.

The Council’s Engineering Department put together a proposal to resolve the issues and preserve the structure which was approved by the Welsh Government’s historic environment service; CADW.

The road underneath the arch reopened last week.

“I’m delighted that the Council has been able to restore and preserve this unique part of Blaenau Gwent’s industrial heritage. I know it’s not been straightforward at times so thank you to everyone involved.

“Making sure our local infrastructure is fit for purpose is important to our residents, businesses and visitors. I would like to take this opportunity to thank local residents and everyone who uses this road regularly for their patience and understanding while this work has been carried out."

The work has been carried out by STRESS (Structural Repairs & Specialist Services). 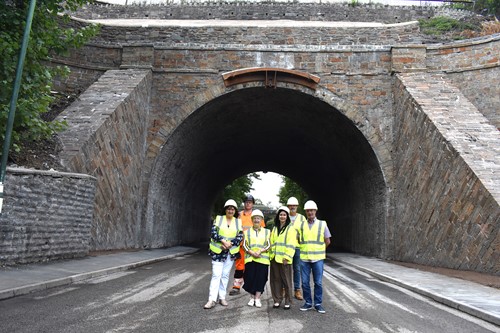